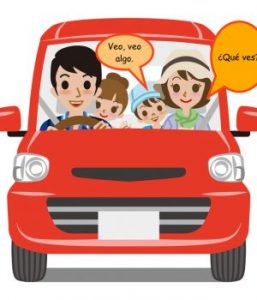 The Eye Spy Spanish Car Game is a fun way to get everyone practicing their Spanish while on a long car ride as well as plane, train, airport, or anywhere you go. This game many people know. It is when you look for things that begin with letters of the alphabet.

The Eye Spy Spanish Car Game goes like this:  (Don’t worry, there is pronunciation help below!)

If you are seeing things but don’t know how to say them in Spanish, still do the conversation and use the Spanish letters, but then guess the words in English. At least you are doing the “I Spy” conversation part in Spanish. Be flexible and modify the Eye Spy Spanish Car Game in whatever way that works for you!

**Want to learn the Spanish alphabet, go HERE and download my FREE mini-lesson.

You can also modify the game for when you are NOT seeing things that go with Spanish words you know, but you want to guess Spanish words. Do this:

To make this easier, choose categories of words, like food or animals so that the guessing is narrowed down a bit.

Pronunciation help – Listen to my mini-audio HERE. The audio just reads through the conversation beginning with the first game version and then the modified version. Pauses are after each phrase so you can repeat aloud.

Below are the pronunciations written out for you too.

Give the Eye Spy Spanish Car Game a try, and bring along your Spanish for You! book or other Spanish book for vocabulary ideas. This game is a great way to review and encourage listening and speaking.

One last idea – if you are still learning the Spanish alphabet, bring along paper and pencil so that one person can say letters randomly and another person or people can see if they write the correct one. Or, switch it around, have one person write a letter, and the others try to say it. You can play Hangman too!

Be creative and think of other fun things you can do while on the road!

PS – If you’re looking for a fun and easy-to-use Spanish curriculum for your homeschool, check out Spanish for You! Your kids won’t complain about doing Spanish!