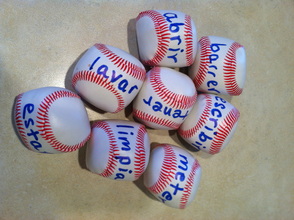 Today my students (grades 5 and 6) and I played Spanish Verb Baseball for the first time. I told them they were my test group, my “guinea pigs”. They informed me they would rather be my “hamsters”!

So, I divided the class into two teams. We used the balls in this picture. One team went into the field with one student as the pitcher in the middle of the room. The other team lined up to “bat”.

The pitcher pulled a ball out of the bucket and tossed it underhanded to the batter. The batter caught it and read the verb aloud. Then the batter let us know if he/she wanted a single hit, double, or home run.

The batter then tossed the ball to any person in the field. The fielder said a subject, and the batter conjugated the verb for the subject. If correct, he/she got to go to first base. If the player had wanted a “double”, then he/she conjugated for two subjects.

For a home run, the batter had to conjugate the verb “top/down”, meaning give all the conjugations from “yo/I” all the way through to “ellos-ellas-ustedes/they-you all”.

Players kept moving around the bases, and I kept tally of their runs.

If a batter got a conjugation wrong, then he or she was out. (No strikes in this game – straight to an out. Otherwise, the game takes too long.) Once a team got two outs, they went to the field, and the other team came up to bat.

The game was a lot of fun, and I am sure there are variations you could come up with to make the verb practice more challenging. If you decide to try the game, I would suggest allowing at least 20 minutes to play.

Get a copy of instructions HERE.