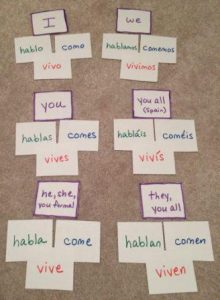 Also, download my Spanish Verb Conjugation Help Sheet to use as a template for different types of verbs.

For more ideas of what you can do with those Spanish verb flashcards, visit my Curriculum Activities page. If at first learning the Spanish verb conjugations seems a little tricky for your child, hang in there. Over time, he or she will pick up on how it works and become a pro!